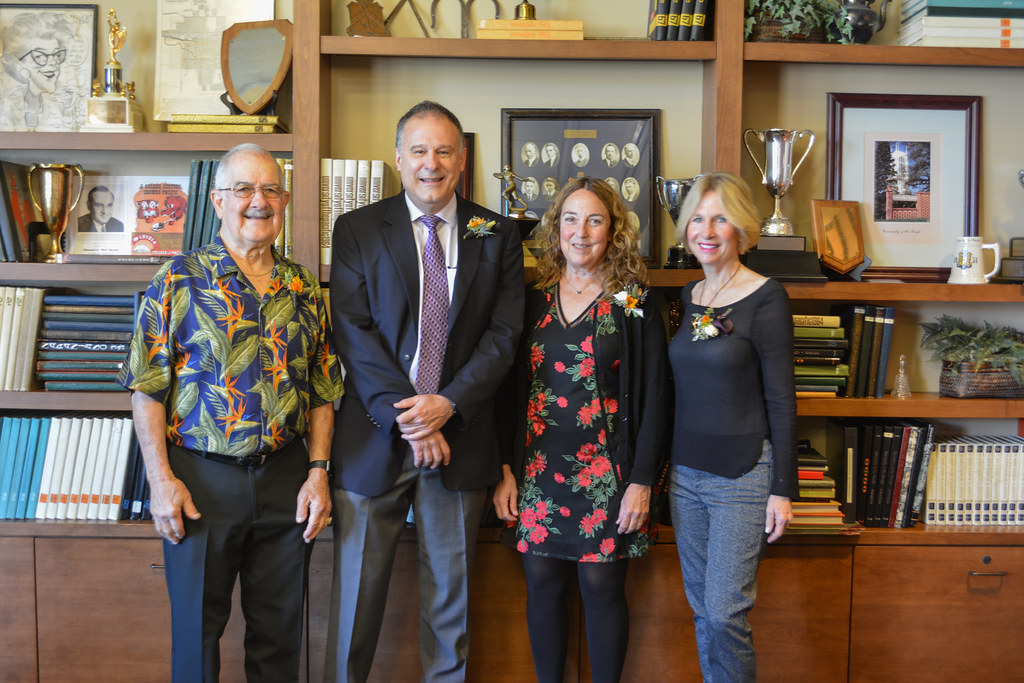 The Pacific Alumni Association recognized the 2019 Faculty Mentor Award winners at a ceremony and brunch on Sunday, Nov. 10, in the Alex and Jeri Vereschagin Alumni House.

Each year, the alumni association recognizes the significant impact faculty members have on the lives of students and alumni with the Faculty Mentor Awards. The honor acknowledges outstanding faculty who have mentored students and alumni through their personal and professional relationships.

Bergman joined Pacific as an associate professor in 2006. It was her love of learning, enjoyment in making documentary films and her affinity for academic research that led her to become a professor. She said she enjoys Pacific because the university values teaching and research, has dedicated students and offers small class sizes.

“I get a tremendous amount of satisfaction from mentoring and teaching; I get to know some students really well, and it keeps my research and interests up to date,” she said. “It’s a way to connect with students—and it’s what makes teaching truly rewarding.”

Bergman has built personal relationships with her students and inspired many to further their education. She has connected students with opportunities to advance their careers in the field of communication.

One former student referred to their one-on-one conversations with Bergman as “priceless. I am forever grateful for the mentorship I received from Dr. Bergman. She helped me to apply what I learned in class to everything that came next, and kept me motivated during the times I was at a breaking point.”

Bergman was Pacific’s 2015–16 Faculty Research Lecturer and received the Jane Jacobs Urban Communication Book of the Year Award in 2013 for “Exhibiting Patriotism.”

Herrin has been with Pacific since 1985 and is described by his students as an energetic and effective teacher who is “down to earth” and “tries to make economics fun.” Herrin said he continues to learn and convey his knowledge to students.

Herrin recalls one former student who earned a PhD in economics and now is a tenured professor at Purdue University.

“He had no idea he could even do this stuff,” Herrin said. “I talked to him after he graduated and we kept in touch, and he’s doing well.”

Herrin has twice been honored as a Fulbright Scholar and has been named a recipient of Pacific’s Eberhardt Teacher-Scholar Award.

Professor Emeritus Saroyan ’64 jumped at the opportunity to become a professor at his alma mater in 1970 and to create the Experiential Learning Program in Pharmacy.

“It seemed like a great opportunity to give back to Pacific Pharmacy and to mentor future pharmacists,” Saroyan said. “I saw this as an opportunity to change the profession.”

He sees mentoring as caring, advising and empowering others to be the best version of themselves.

“I always tell mentees to follow their passions and never give up,” Saroyan said. “Mentoring requires the development of a genuine relationship between the mentor and mentee to work. Everyone needs someone in their life to guide and encourage them.”

Saroyan served as assistant to the dean and director of the university’s pre-health programs. During his faculty years, he taught and advised more than 3,000 pre-pharmacy and pharmacy students. He retired from Pacific in 2002.

“Ralph Saroyan has contributed greatly to the success of so many of our Pacific pharmacy alumni,” said Dean Phil Oppenheimer. “The students he worked tirelessly to recruit and advise have gone on to become not only great pharmacists but often exceptional leaders within the profession. Ralph is an extraordinary mentor, friend, brother, leader and teacher.”

In 2010, Saroyan was selected as California’s Pharmacist of the Year for his mentorship to the profession of pharmacy.

Weick was the professor of management in the Eberhardt School of Business and held joint appointments in the School of Engineering and Computer Science. She is also the founding director of the Powell Scholars Program, which is Pacific’s top academic merit program for all majors throughout the University. She joined Pacific faculty in 1990 and retired from the university in 2016.

She said she became a professor because she wanted to follow her curiosity and spend time investigating topics that interested her.

“Mentoring means helping others to elevate their expectations of themselves and to internalize these expectations, so they last a lifetime,” she says. “I think mentoring also means helping others embrace changes in what they want out of life. Over time if you can integrate everything you’ve learned from the past into your future, you’ll truly be a unique individual.”

One of her nominators recalls that Weick was “the first person who made me believe that I could achieve more than I realized.”