Leading Voices: DeRosa’s impact on Pacific resonates to this day 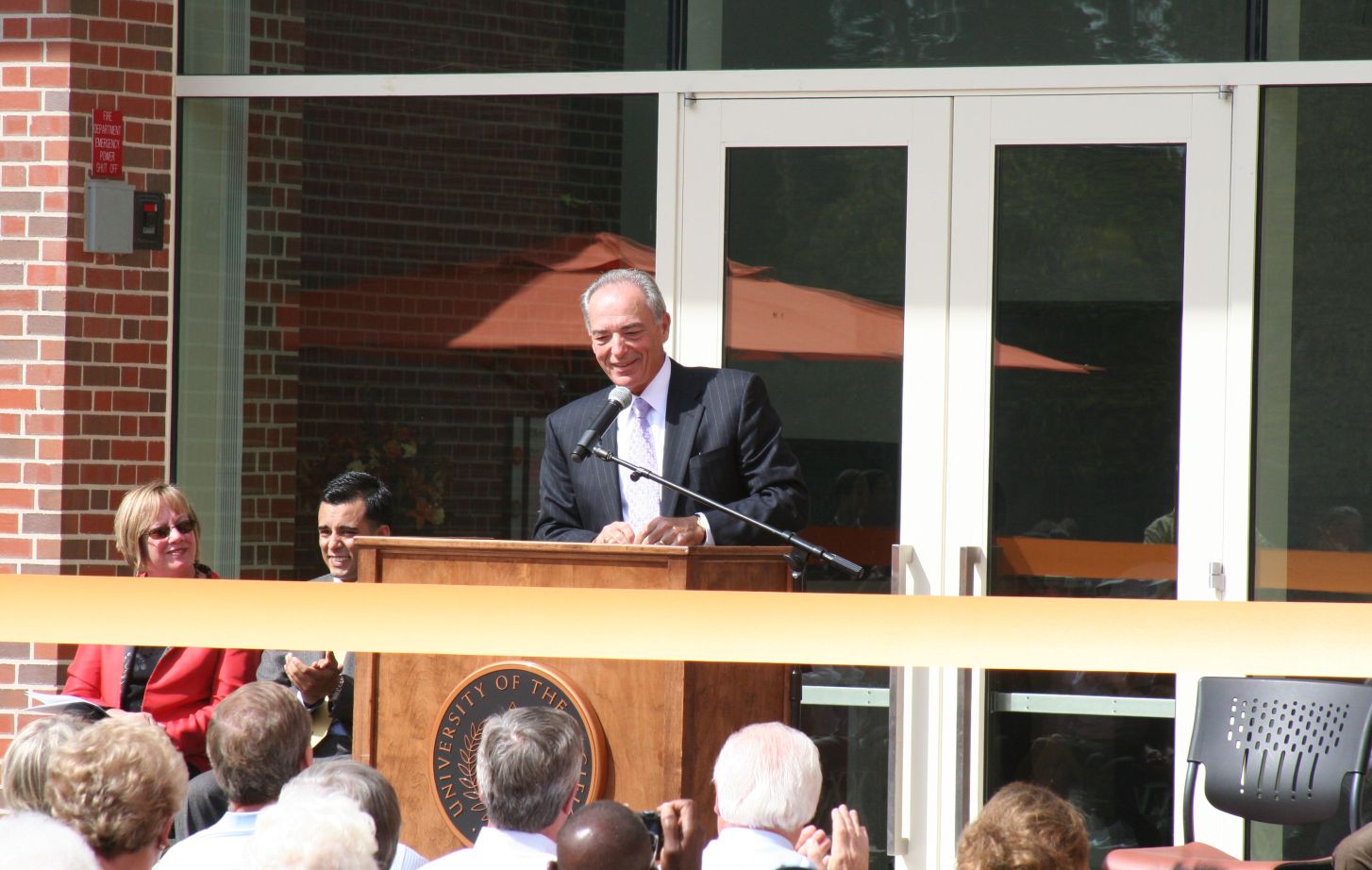 Donald V. DeRosa’s virtual return to the university he loves and helped revitalize started with recognition of his transformative work and ended with conservatory students celebrating his upcoming 80th birthday in a stirring musical tribute.

In-between, there was a trademark DeRosa moment, when he took on a persona that colleagues, students and friends recognize—that of a university president ready for a challenge.

Speaking to an online audience of more than 200 on Feb. 3 as part of the Leading Voices series sponsored by the Pacific Alumni Association, the former University of the Pacific president (1995–2009) was asked: “How can we get to a billion-dollar endowment and how can we become a Top 10 university?”

DeRosa paused. But not for long.

“A billion-dollar endowment won’t be enough. It is difficult to attract students from a wide range of backgrounds, so you need a large endowment, much of it focused on scholarships,” DeRosa said. “When I arrived at Pacific, the endowment was $65 million. The other day in my meeting with the Powell Scholars, I learned the endowment is $528 million. And it is going to grow because of the wise investments the university makes. But it has to also grow through the gifts and generosity of individuals who care deeply about Pacific.

“Becoming a Top 10 university will not be dependent on the resources we have in our endowment. Every unit of the university needs a program of true distinction that develops the whole person as it works toward educating the best and brightest, as we have in the past. That’s how we become a Top 10.”

The question of national rankings was in DeRosa’s wheelhouse. He was driven to have Pacific make the Top 100 of the U.S. News and World Reports rankings.

“We all know that there are problems with the ranking systems, but they also have a fair amount of validity and are read by parents and their children,” DeRosa said. “Vice President for Business and Finance Patrick Cavanaugh figured out that we were around 125. So, we looked at the variables and dimensions used by U.S. News and determined what things had merit and what things we could change. We actively worked on those goals and got us up to 95 or 96. I was very proud.

“They had another ranking for best value. We were in the Top 30 for five or six of my years at Pacific. And that was a measure of affordability. We were accessible to students.”

DeRosa spoke in-depth on a number of other topics:

Building his team at Pacific

“The team I put together at the outset and in the years that followed I think was tremendously helpful. A lot of people said, ‘Don, you’ve done a great job.’ But I have to give credit to the people I worked with. I hired Phil Gilbertson as provost as one of my first hires. There were so many who were so vital to our success at the university.”

Gilbertson, who now lives in Portland, Oregon, said, “I always said I had the best job in the world with Don as my partner. Every leader talks about building a team, but not many back those words up the way Don did. His collaborative and patient process in discussing issues involved everyone and led, I believe, to rational and sound decisions. They were not always easy, but the issues were discussed thoroughly.”

Added Judy Chambers, vice president for student life at the time of DeRosa’s hiring, “He included you and valued your input. We truly were a team.”

Within his first year at Pacific, DeRosa had to tackle—literally—a huge issue: should Pacific keep its Division I football team? The regents voted to end the program.

“When you make tough decisions sometimes, as painful as they are, they pull people together,” he said. “The football decision that we made in 1995, I don’t count that as an accomplishment. It was painful, it was sad, and even to this day there are people who are sad that there is no football program. But it was the right decision and that has been proven over time.”

Philanthropy and the Powell family

For philanthropy, one date remains etched in his mind: April 21, 2007.

“I was in Carmel for an event and I received a call from Jeannette Powell. She told me that Bob was going to call me for a meeting and ‘whatever you do, take that meeting.’ I drove home, changed my clothes and then went to Bob’s office. He was there with his accountant. He told me, ‘Don, I just want you to know Jeannette and I have made our decision and we are going to give $100 million to University of the Pacific.’ It took my breath away.”

Later, back in Stockton, DeRosa called Gilbertson into his office to reveal the news.

“He stunned me at that moment,” Gilbertson said. “It was hard to believe. But it goes to the depth of Don’s relationship with the Powells. When Bob Powell was battling some illness, Don went to bat for him and got him in to see the right doctors at Stanford. And he did it because he cared about Bob as a person.”

Said DeRosa: “That day, April 21, 2007, changed the lives of students at Pacific in perpetuity.”

Donald and Karen DeRosa now live in Greensboro, North Carolina. Donald was diagnosed with Parkinson’s disease five years ago, but says he has coped with it well.

“Thank you for everything you have done for this university and thank you for today,” Callahan said at the conclusion of the Leading Voices event. “Today has been magical.”

If you missed the event with Donald DeRosa you can watch it here.

Below are comments from post-event interviews with Pacific community members.

“Donald inherited me when he arrived, and that’s not always easy. He came here at a time when many university presidents did not see the value of student life and the academic program working together. He was just the opposite. He gave strong support to students and had high expectations. When it came time for me to retire, he urged me to stay in a part-time role. I was an administrative assistant in development for another 10 years. Don had a wonderful way of making you feel respected and wanted.”

“Don, thank you for the magical experience of serving as the chair of the board during your presidency. I could not have imagined a more perfect working relationship.”

“Thank you for sharing your memories and insight about all of the past monumental history of Pacific, as well as the everlasting tradition of focus on student life, empathy and student awareness. Very inspirational.”

Gilbertson wrote “Pacific on The Rise: The story of California’s first university” (2016)

“The chapters I wrote about Don were easy because everything was fresh in my mind. But they also were difficult because you do not want to be biased in a historical account. Don actually was very helpful in my writing of the history of Pacific, including the early years. He has a razor-sharp memory and loves history.”

“I was in Athletics at the time and we were on the plane on our way to Boise for an NCAA Tournament game (2005). At the time Don was trying to get people to use ‘Pacific’ instead of UOP because he thought Pacific was a more regal name. He told me, “Jim, you do the loudest chants in our section (at Spanos Center) by yelling ‘U.O.P.’ Could you try to use Pa-ci-fic? … I remember trying it out right away and I couldn’t get it to catch on in the first half of our game with Pitt, so I resorted to belting out U.O.P. in the second half.”