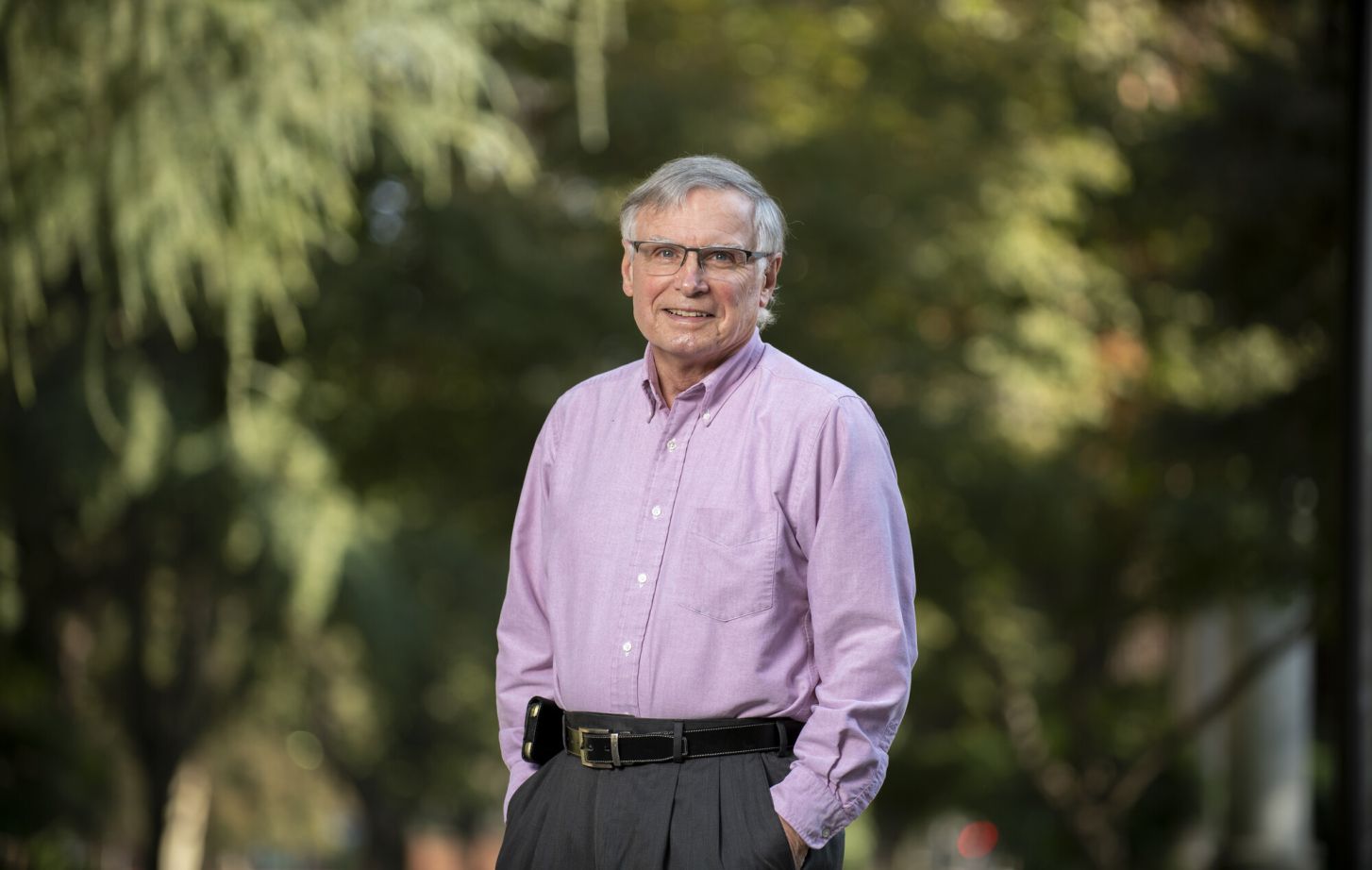 On March 23, faculty, staff, students, alumni, emeriti, administrators and friends gathered via Zoom to laud Gene Pearson for his 50 years of dedication.

After five decades as a professor at University of the Pacific, Gene Pearson has left an impression of sustained excellence on the university during his iconic tenure.

Pearson taught his first class at Pacific in 1971 and he continues strongly 50 years later. Pacificans of all ages and disciplines are uniting to honor Pearson for his brilliance, dedication and longevity.

“First of all, I never would have expected Year 50 to be an online year. So that has made it interesting,” said Pearson, a professor in the Department of Geological and Environmental Sciences in College of the Pacific. “There are times when I would prefer to be invisible and do my work and enjoy another rewarding year with students. But I do appreciate all of the genuine kindness and support that is being shared.”

“I walked on campus at age 24 and started teaching soon after. If you had asked me at that point what I had planned for the long term, I don’t know that I could have given an answer. Pacific has been the right place for me. I never had the desire to leave.”

“Gene is a remarkable person who has civility and caring inside and outside the classroom,” said Judy Chambers, former vice president for student life. “He is an excellent teacher and also is very concerned about the whole student experience. Pacific was the perfect fit for Gene.”

“When you think of it, 50 years is just astounding,” said Professor Lydia Fox, who has worked alongside Pearson in the same department for the past three decades. “He has been a great mentor to me. He shows you what it’s like to teach at Pacific, and does so with students always in mind.”

On March 23, faculty, staff, students, alumni, emeriti, administrators and friends gathered via Zoom to laud Pearson for his 50 years of dedication. The 150 people taking part included celebrants from as far away as Guam and Denmark.

Following the ceremony, he virtually received a commendation from the City of Stockton at a city council meeting. The commendation lauds Pearson for his 50 years of teaching and dedication to the university and community. It is signed by Mayor Kevin J. Lincoln II and six council members.

“I still see the fire in his eyes and know how much he still enjoys working with students each and every day,” Maryann Pearson said of her husband of 44 years.

The city commendation mentions many of Pearson’s honors including the Distinguished Faculty Award, the Faye and Alex G. Spanos Distinguished Teaching Award, the Faculty Mentor Award and being named a Fellow of the Geological Society of America.

There are many other endearing aspects of Gene Pearson’s life and career. He shared some thoughts in an interview.

His first day teaching at Pacific

“At that time, we were in the Quonset huts that are no longer on campus. I had an 8 o’clock class and the department chair’s office was adjacent to my classroom. The heater was in his office and so there was a large vent between the classrooms. I knew that he could hear every last thing – even though he claimed it was not the case – that went on in my classroom. Nothing like having your boss sitting there as you are just starting at a new job. I am sure my blood pressure rose.”

The department head was Stan Volbrecht, who became Pearson’s mentor. “He was an incredible person, and if I have had success at Pacific a lot of it is because of him.”

Pearson was lauded by many for making student field trips to the coast, Yosemite National Park, and other places in the Sierra and the Central Valley enjoyable learning experiences.

“I learned the most geology and topography facts from Dr. Pearson on field trips,” said Katie Ortega ’18, currently a doctoral student in Illinois. “He always kept things lively.”

His favorite places on campus

“The rose garden between Burns Tower and Knoles Hall would be one of them. You have the early buildings on campus and the tower which was a later construction. That is the historic center of campus and the grounds crew keeps it in absolutely immaculate condition. Morris Chapel also has significance, because that is where we were married.”

A regular on employee search committees

Pearson is currently on the search committee for vice president for student life. It is one of dozens of such committee assignments he has tackled in his career.

“At one point, I would have referred you to President (Donald) DeRosa and (former Provost) Phil Gilbertson. Ask them ‘why did you keep putting Pearson on all of those search committees?’ But it was important and I learned a lot about Pacific by serving on committees and being involved in searches. That was a window for me to what goes on outside of the classroom.”

The big, artistic penny – and later a nickel

Pearson stresses the importance of “scale” and the need to “compare size” when taking photos during field or class work. In the late 1980s, student James Patrick Coughlan ’80 brought in a huge penny – two-feet in diameter – to be used for that purpose. “He was very artistic and he carved out the image of the president on the coin. Later, he brought me a nickel to go with the penny. They actually have worked very well in showing scale.”

Living in Stockton for 50-plus years

“I have very much enjoyed my life in Stockton as well as Pacific. For almost nine years I would walk around Victory Park with our boxer Quinn. On occasion we crossed paths with (now State Senator) Susan Eggman, who visited my freshman seminar classes on several occasions before she became a member of the State Assembly.”

Proud of a successful and caring family

“Both of our children are involved with health care. Our daughter Rebecca O’Reilly is a Licensed Practical Nurse in Lynnwood, Washington, working in the COVID-19 unit of a rehabilitation facility.  Our son, Michael Pearson (’99 Eberhardt School of Business) and his wife Dr. Junie Lazo-Pearson (’98 COP Psychology ’98) are the owners of Advanced Behavioral Health in Orange County. They provide science-based Applied Behavior Analysis treatment for children, teens, and adults with autism spectrum disorder and other developmental disabilities.” 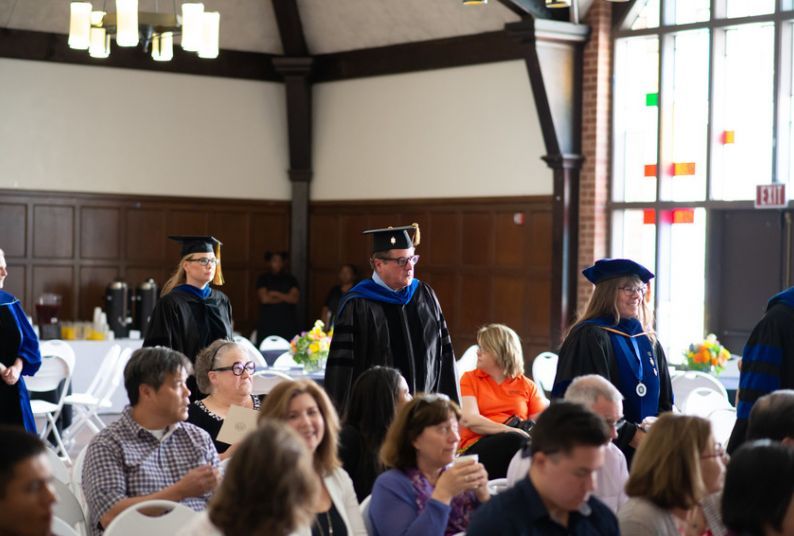