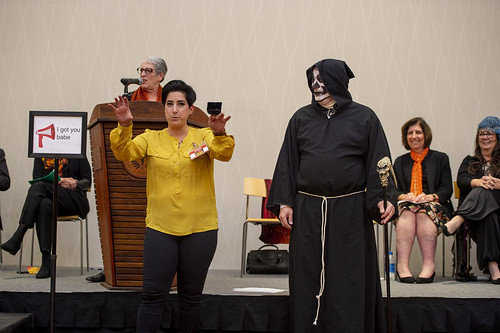 Individuals from across the Stockton Campus came together to celebrate their colleagues who received Cavanaugh Distinguished Service, Pacific Team, and Champions of Diversity and Inclusion awards. Previously part of the spring Staff Years of Service Luncheon, the awards were presented at this fun, festive celebration that included a Halloween costume contest. Awards for the Sacramento and San Francisco campuses will be announced at a later date. The Sacramento and San Francisco Champions of Diversity staff award recipients will be announced and honored later this year on their respective campuses.

The award, which recognizes one exempt and one non-exempt employee, was established and endowed by Patrick Cavanaugh, former vice president for Business and Finance, and his wife, Janita, to recognize individuals who demonstrate leadership, innovation and service to the university.  Jonallie Parra and  Rodney Blankenship were this year’s recipients on the Stockton Campus.

Parra is the university budget director. Under her guidance, a five-year dynamic budget model has been developed for university leadership to look at multi-variable scenarios, outcomes and effects. This has become a very valuable tool that provides insight into the potential impact of decisions as they are being made regarding tuition and rate setting and expenditure levels. Parra’s continued efforts have created more efficient and effective resource allocations. She supports her colleagues and staff through educational opportunities, mentoring and sharing her vast experience. Parra has been with Pacific for nearly two decades. Her guidance, knowledge and insight are often sought by those across the university.

Blankenship, systems administrator III in Pacific Technology, helped lead Pacific’s successful Office 365 migration project as the primary technical resource. During his more than 20 years at Pacific, he has helped ensure the success of the university email system. Blankenship is always coming up with new and improved ways to handle the back-end mail systems. He is an invaluable resource for training on the university email system and all of the unique needs that come with over 3,800 accounts. Blankenship holds himself to the highest personal and professional standards. He is exemplary in every aspect of his career and life at Pacific and ensures he represents what it means to truly be a Pacifican in everything he does.

Champions of Diversity and Inclusion Awards

Marr, director of procurement services, has served Pacific for almost two decades. As part of her service, she led efforts to create and implement Pacific’s purchasing policy that standardizes our commitment to supplier diversity, and reflects the critical importance of small and woman/minority-owned businesses. In 2013, Marr was part of an inaugural committee made up of various government agencies, colleges and Caltrans to establish a Stockton Regional Public Agency Consortium (SRPAC) that promotes ongoing efforts to train and sustain local and diverse supplier opportunities for small, minority and economically disadvantaged businesses and firms. Marr is a champion who promotes diversity and inclusion within and beyond the campus, extending Pacific’s commitment to the surrounding community.

Martinez, associate director of athletic training, was selected to attend the NCAA Common Ground seminar, which aims to establish an inclusive environment in athletics for participants of all sexual orientations, gender identities and religious beliefs. With the knowledge gained through this seminar, she came back to campus energized to continue to make a difference in the lives of our student-athletes. She has conducted informational sessions for our coaches, staff and student-athletes to help foster a supportive environment for our LGBTQ+ student-athletes and those who teach and lead them. Martinez is committed to supporting the well-being of student-athletes and is committed to making sure that all students are given the support and respect they deserve.

Started by former President Pamela Eibeck in 2018 and continued under the leadership of Interim President Maria Pallavicini, the Pacific Team Award recognizes successful collaboration going on across the university between and within departments in the areas of customer support, innovation and efficiency, and cost savings. The winners this year are:

Cost Saving:
This year we want acknowledge the challenges that all employees faced with the university-wide budget reductions. So instead of awarding an individual team for the cost savings award, Pacific recognizes everyone in their efforts to fulfill budget reduction targets and in individual’s daily activities that contribute toward cost savings for their departments impacting the university as a whole.

Customer Support:
Team: Staff Advisory Council executive leadership
Awardees: E. Ann Sica, Alyssa Wray, Kristan Turnbeaugh, Janet Gonzalez, Lori DeMercurio, Ann Rose and Rebeca Stovall
The S.A.C. executive board has come together quickly, efficiently and effectively. The board has brought S.A.C. representatives together to provide a forum for their voices — and those that they represent — to be heard, as well as provided the tools and granted access for representatives to be successful.

Congratulations to all award recipients and thank you for the important contributions you make to the university community.