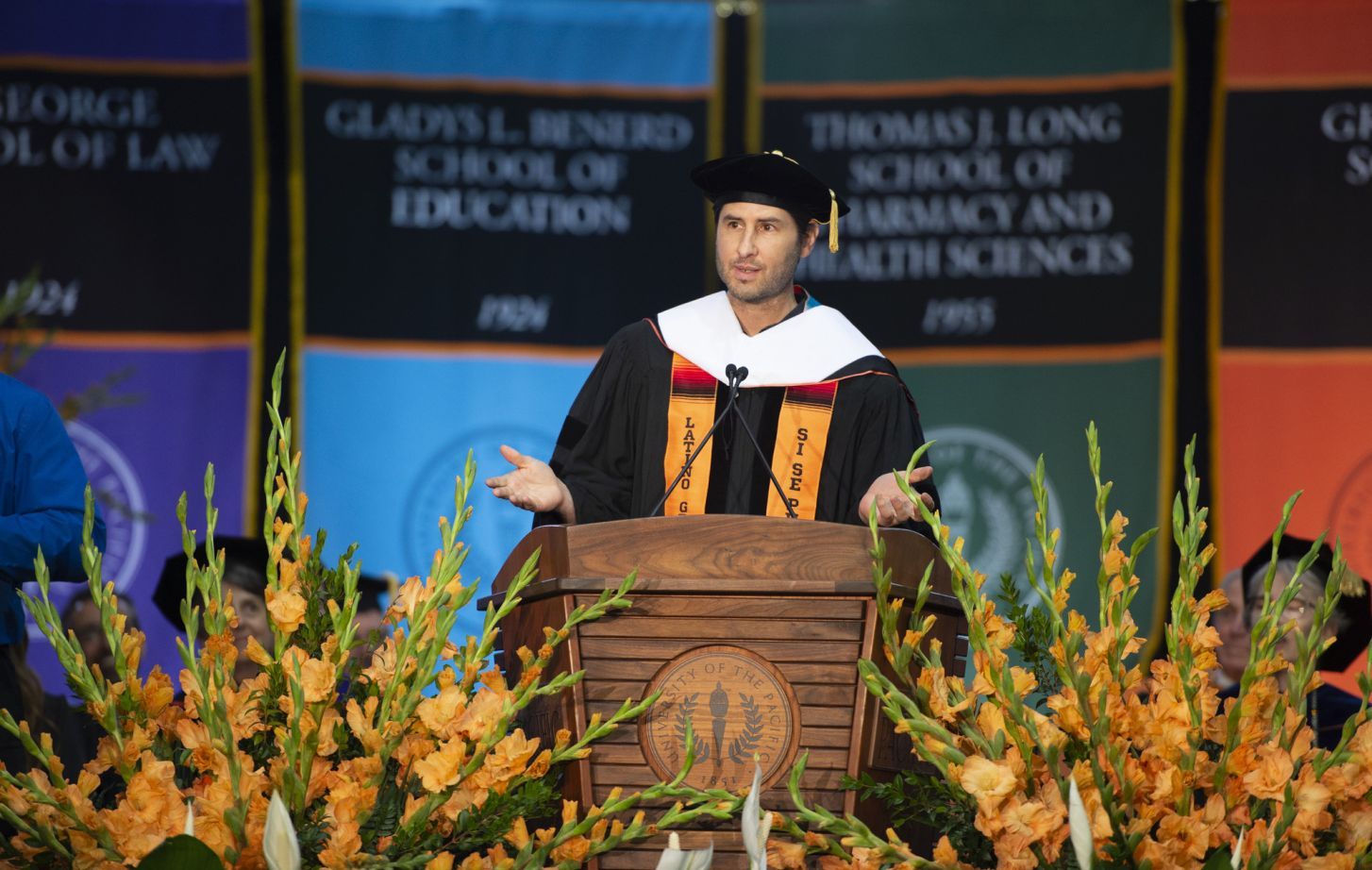 “Milo Imagines the World,” released on Feb. 2, continues the graduate’s forte of tackling serious social issues with the backdrop of understanding and hope. “Milo” has been on the New York Times Best Seller List (for children’s picture books) for portions of the past month.

He will speak virtually at noon on April 7 as part of the Pacific Alumni Association’s Leading Voices series.

The bespectacled Milo, wearing a yellow-green hat with a pencil and sketch pad in hand, joins his sister for a subway ride filled with imagination and dreams, yet ending at the most stark of places – the prison where their mother is incarcerated. Life’s possibilities are explored and assumptions are shattered by Milo with his train-ride drawings.

“I had to figure out how loud or how quiet I was going to be in my writing about prison and the mother’s incarceration,” de la Pena said. “I decided to place it at the end, and I hope adults and children can come back to that and have their thoughts evolve during additional readings.

“Today, during the pandemic, it’s even harder to resist lazy stereotypes because we are being asked to stay away from people. You can’t get to know the real story of their lives. You just see them six feet away and make assumptions.”

“Milo Imagines the World” is the third collaboration between de la Pena and Sacramento-based illustrator Christian Robinson. They swept the prestigious Newberry Medal (writing for de la Pena) and Caldecott Honor (illustrations for Robinson) with the 2016 book “Last Stop on Market Street.” They also worked together on “Carmela Full of Wishes” in 2018.

Robinson suggested the concept for the new book.

“Christian grew up with an incarcerated mother. He really wanted to share that story,” de la Pena said. “When he told me about that, I knew we were going to do this book together. It was a great challenge and opportunity for Christian because he had to be an illustrator in two ways – his own drawings, and the drawings Milo was making.”

He said it is important for authors and illustrators to respect each other’s space. Having played basketball at Pacific, de la Pena said that experience helps in the literary creative process.

“As a point guard, you try to deliver the ball in the best position for your teammates. As an author, I know what Christian’s strengths are as an illustrator. You try to put your illustrator in the best possible position to succeed. We know each other so well now that a lot of this comes naturally,” de la Pena said.

The book nears its conclusion with Robinson’s vivid illustration of a prison gathering room and de la Pena’s powerfully descriptive words about Milo:

“And it’s in that tight tangle of familiar arms that he feels most alive.”

“I tinkered and tinkered with those words and then they locked into place like a puzzle,” he said. “The anxiety flees for a second and he’s in his safe spot.”

“I think it’s a challenging book for parents, but not for kids. Parents have an instinct to protect their children, but that’s an adult sensibility. What’s amazing about kids is they will enter a story wherever they are. Some kids are fascinated that Milo makes art. Some are curious about where the mother is. I like to have layers in a book so kids can enter at different places.”

What’s next for de la Pena?

“I am working on what could be my favorite book. It’s called ‘Patchwork’ and it is illustrated by Corinna Luyken. She did ‘The Book of Mistakes,’ which really put her on the map,” he said. “There are so many children who are pushed at an early age about what they want to be. I want to challenge that in ‘Patchwork.’ I gave it that title because people are so much more than any one thing.”

That resonates with de la Pena who came to Pacific as an athlete, but exited on a path to becoming an author.

“I would not be an author if it wasn’t for Pacific. I had never shown my writing to anyone. I always thought, as a male, I wasn’t supposed to be writing poems,” he said. “But then I had these incredible professors who tapped me on the shoulder and said ‘you have a talent, a gift.’ It makes you want to share. I owe so much of who I am today to Pacific.”