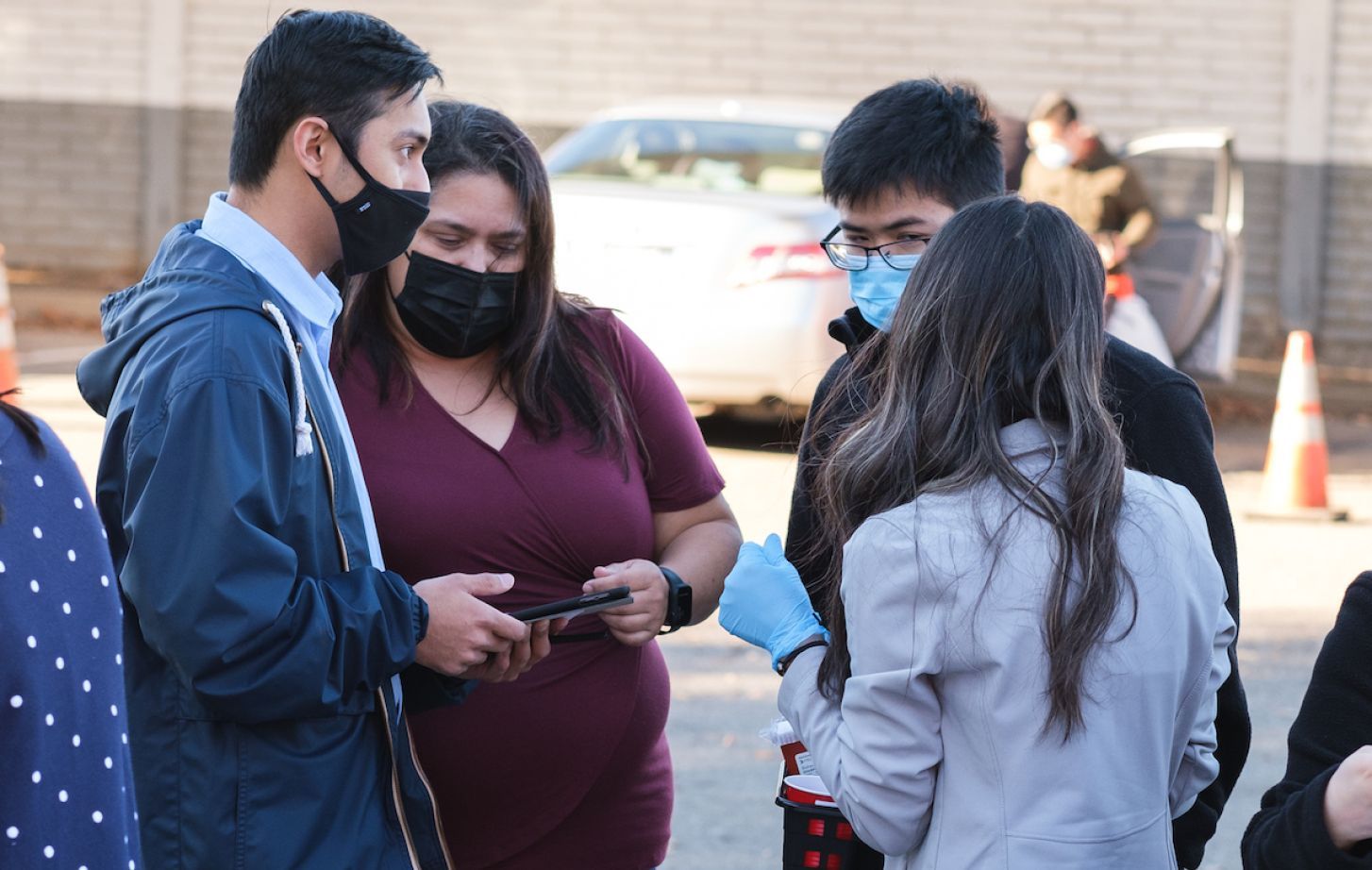 Veronica Bandy ’00, ’08, clinical professor and coordinator for the Sacramento Region for the Thomas J. Long School of Pharmacy, has organized her share of flu and routine vaccination clinics at University of the Pacific.

None have compared to the massive effort she undertook this year during the COVID-19 pandemic.

Bandy and her team—many of them students—spearheaded some of the earliest COVID-19 vaccinations clinics in Pacific’s three campus regions:

As a double alumna, Bandy says the commitment to serve the community is inherent in Pacific’s culture.

“Pacific gives back. In the pharmacy profession, we are trained to give back as well … We are known for healthcare outreach and leadership,” said Bandy.

And she’s leading by example.

“We are truly fortunate to have her as an exemplary alumni role model, and mentor and advisor for our students,” said Rae Matsumoto, pharmacy school dean.

Her path to the profession

Bandy was the first in her family to graduate college, something her family always encouraged her to pursue.

“(My mom) said, ‘I never got the chance to do that. I want better for you,” Bandy said.

Since she had always excelled at biology, she knew she wanted to do something in the sciences, but initially those plans didn’t include the pharmaceutical profession.

“Early in my undergrad I was pre-med and I did that for three years, and decided it was not what I wanted to do for the next eight years of college. I did eventually want to have a family, and it's a lot harder in the medical field as a physician and being a female to have that work-life balance.”

It was a job as an undergraduate at an area pharmacy that set her on a new course. She was training to be a store manager when an opportunity arose to be a pharmacy technician. She was still trying to figure out what to do after graduating when her pharmacy manager suggested she apply to pharmacy school. “You’d be really good at it,” he observed.

And she is. After graduating from Pacific’s Thomas J. Long School of Pharmacy with her doctor of pharmacy degree in 2000 she started a job teaching at Pacific only two days later while continuing to work towards her master of science degree, which she earned in 2008. She also landed a job as a part-time pharmacist at Walgreens which she still has, now serving as their immunization trainer.

“I believe that when one door closes, another door opens, and you just have to be willing to walk through it,” Bandy said.

In the more than 20 years she’s been at Pacific, Bandy has had a tremendous impact. Much of her focus is on mentoring pharmacy students through her various roles, including faculty advisor for Operation Immunization.

The group’s impact reached a new level during the pandemic.

“It was a great opportunity to help the community and also have the students interact with each other clinically, even though they were studying remotely,” said Bandy, calling it a win for the profession, students, and the community.

Getting approved to distribute vaccines on such a large scale wasn’t easy. Initially, only hospitals were approved as vaccination sites, but her determination—and lots of paperwork—paid off.

The university was selected by Blue Shield of California to be among the first in the state to administer the COVID-19 vaccine.

Of the 14 pharmacy schools in California, Pacific is one of only two to have its own COVID-19 clinics and vaccines, with the added distinction of holding many clinics while students were still virtual.

“It reflects her dedication to the health of our community and those around us,” said Maria Pallavicini, university provost and executive vice president for academic affairs and head of Pacific’s COVID-19 Council. “Veronica is at the forefront of pushing forward to get as many people vaccinated as possible.”

“The public has greatly benefited from Pacific’s partnership,” said Dr. Maggie Park, San Joaquin County public health officer. “I personally know of many people who visited one of the vaccine events and they shared how smoothly it went.” Veronica Bandy helps students during a COVID-19 vaccination clinic on Dec. 10 on the Stockton Campus.

While the time she devotes to the clinics is immense, Bandy’s impact goes beyond the hours she volunteers.

“It's one thing to help us set up these clinics, but she also guides us so we can do it on our own,” said Kyle Vo ‘22, a third-year pharmacy student. “I felt at the end that I could actually set up and run an entire clinic by myself.”

One of the key lessons was how to adapt. Along with the logistics of managing the vaccine supply and strict COVID-19 protocols, students and volunteers had the added challenge of holding clinics outside in varying weather.

“Sometimes we’d get there, and the tables were wet … And then we put up the tents, but then it gets windy at two o'clock,” Bandy said.

As vaccine eligibility expanded to include kids, they had to retrain volunteers to ensure they were prepared for a different population. “They're going to be a little more nervous,” Bandy said. “They're more prone to pass out. How do we prepare for that?”

The fall semester also brought a new group of first-year students working in the clinics for the first time.

All the careful planning paid off, ensuring a safe and smooth process for those attending the clinics and providing an invaluable learning experience for students.

“The impact of these clinics in helping students grow as professionals and leaders has been tremendous,” said Matsumoto.

Bandy says they’ll continue to assess the need for future clinics to ensure they serve Pacific and the community.

Dedicated to the profession

Bandy’s dedication was recognized earlier this year with the Podesto Award for Excellence in Student Life, Mentoring and Counseling, which honors members of the Pacific community who have played a significant role in enriching the student experience.

In her nomination letter, Matsumoto called Bandy one of Pacific’s “unsung heroes” who has supported and ensured the success of thousands of pharmacy students.

“She has helped us achieve beyond what we believed we could, by guiding us and providing the best environment for us to work in,” wrote Woojin Lim, a second-year pharmacy student at the time.

Bandy says she’s thankful she was able to share the Podesto honor with her mother before she passed away in April.

Her funeral was the only time Bandy has missed one of Pacific’s COVID-19 vaccination clinics. “She was so proud,” Bandy said. Her kids, 10 and 12, are too.

Despite all the weekends away from home due to the clinics, “They understand” Bandy said. “They say, ‘we know why you’re doing it.’”

Bandy watched her own mother put in long hours, nights and weekends at a telephone company. Her mother was eventually promoted to a high-tech position, Bandy said.

“She worked her way up through the company…It just goes to show if you work hard, you can succeed.” 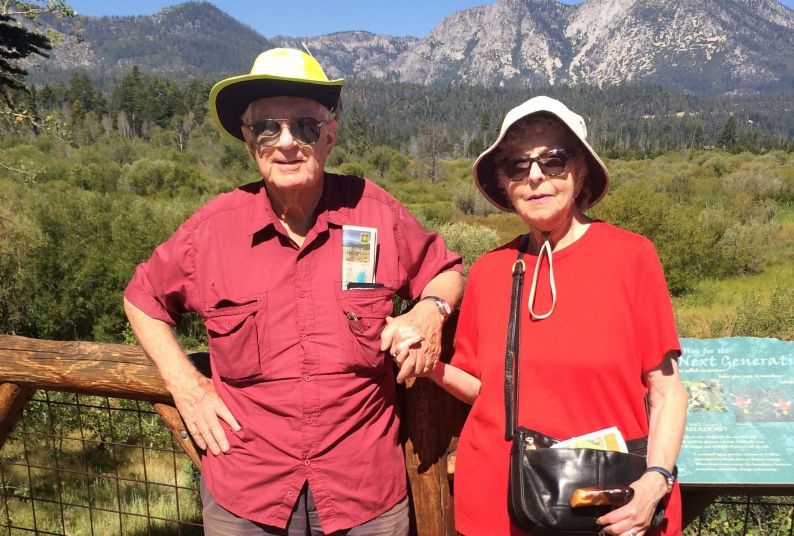 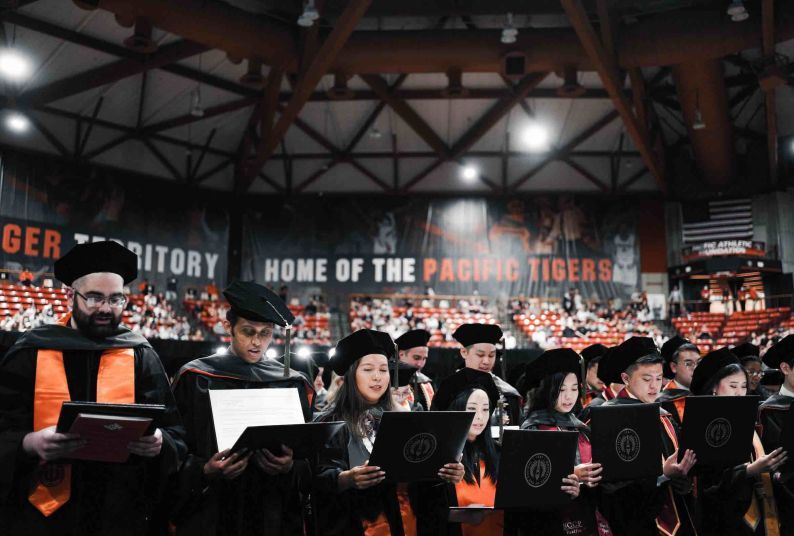 Pacific leads effort to include DEI in national pharmacy oath 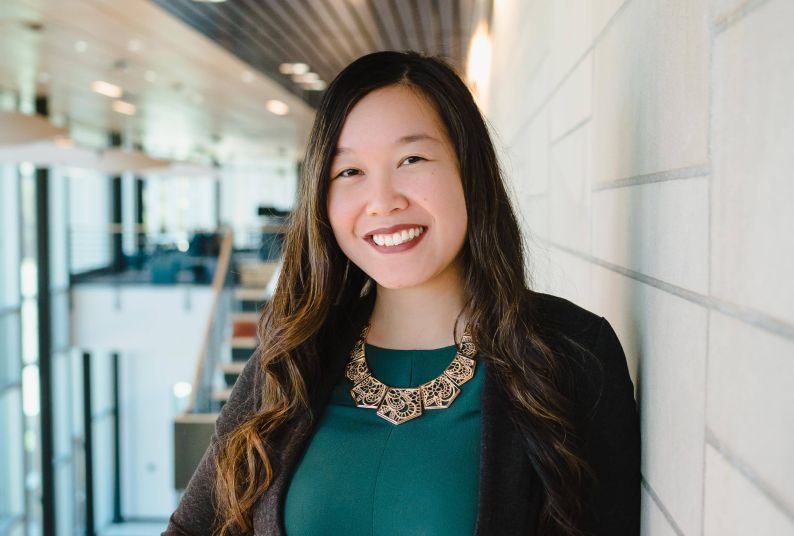