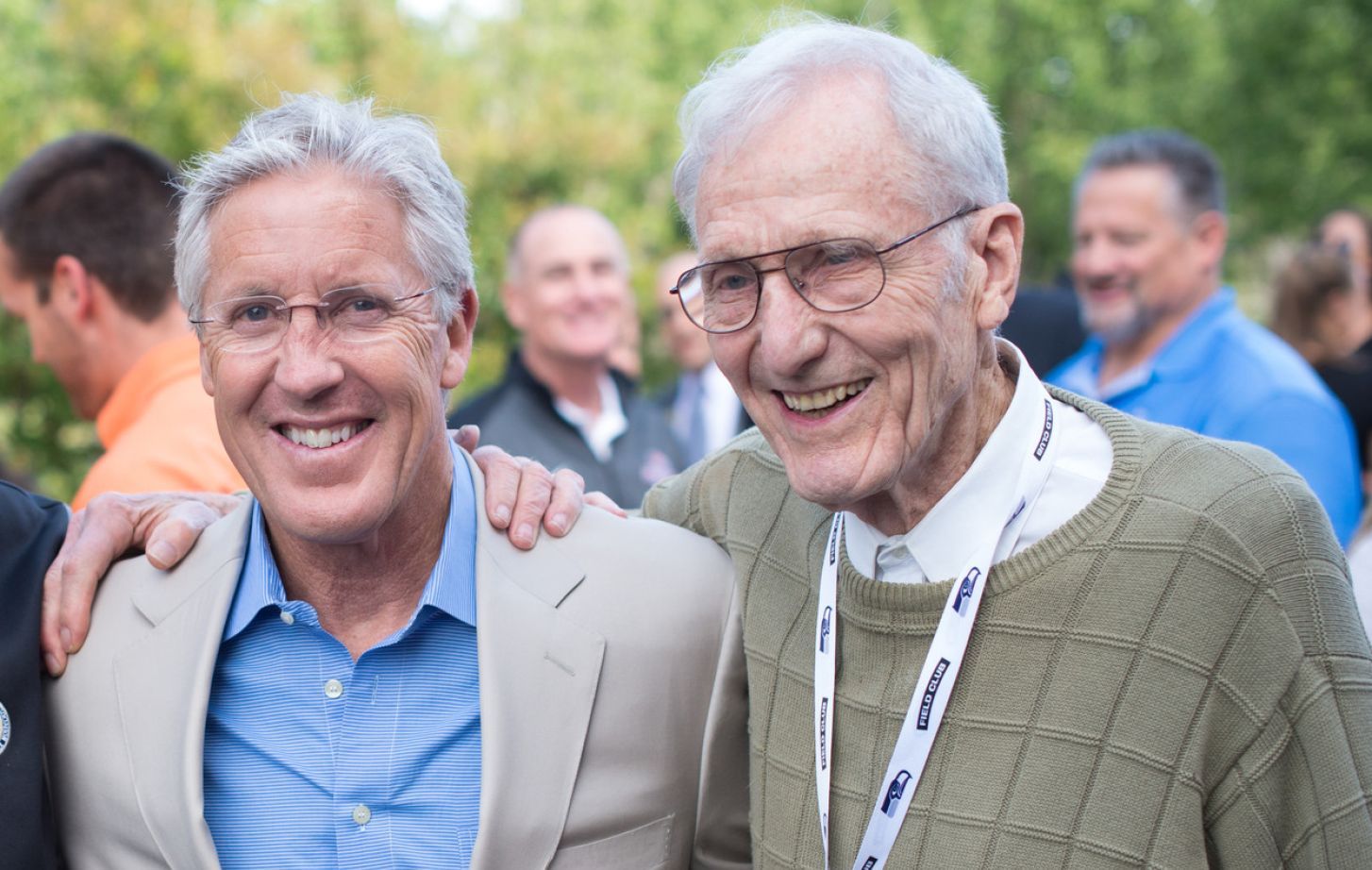 Alumnus Pete Carroll '73 '78 and Professor Larry Meredith have remained lifelong friends. Carroll and his wife Glena were the lead donors behind the endowed professorship.

With the classroom as his pulpit, Professor Emeritus Larry Meredith could captivate his students in just a few words. During his 33-year tenure at University of the Pacific he left a lasting impression on thousands. To those whose lives he touched, he is more than a professor. He has been described by his former students as:

“A modern day renaissance man.”
“An angel.”
“A legend.”
“If he were a character in Greek mythology, he would be a hybrid cross between the centaur trainer of heroes Chiron, and Dionysus, the god of wine, theater and religious ecstasy.”

While that last description may sound peculiar, to those who know Meredith or took any of his classes, it’s actually quite perfect. There is no earthly comparison to describe him.

Now, in an extraordinary display of admiration and affection, more than 50 Pacific alumni have come together to honor the beloved professor by establishing the Lawrence Meredith Endowed Professorship in the Humanities. This marks the first time in university history that so many alumni have contributed to endow a professorship.

“I’m really quite honored,” said Meredith. “My goodness this is wonderful that people are reacting this way to my teaching career so I’m really pleased about that. I wouldn’t want it any other way.”

The fund will provide support for research and scholarly activities for a faculty member in College of the Pacific who has distinguished contributions in teaching, scholarship and service in the fields of the humanities. It will also ensure Meredith’s legacy endures.

Alumnus Pete Carroll ’73, ’78, head coach of the Seattle Seahawks, and his wife Glena ’77 formed a lifelong friendship with Larry and his wife Pat after taking Meredith’s Religion of the Body class. That spring, Meredith officiated the couple’s wedding with Pat serving as a witness.

“That's how much we thought of him and we wanted him to be part of our love and part of our history and our future and fortunately for us, Larry has been woven into our lives throughout,” said Pete Carroll. “He is a consummate professor and when you're with him you're in the presence of a special energy and you feel like you're still in class. Any topic that he starts talking on, you can't wait to hear what he's going to say next and I think that's really the mark of a great teacher.”

“His wisdom was obvious at the time,” said Glena Carroll. “We were young and impressionable. It was obvious and he's just continued to share his wisdom with us throughout our lives. We’re very fortunate to have maintained that connection with a professor going all the way back to UOP days.”

The Carrolls were also the lead donors behind the endowed professorship.

"We love him so much and we love all that he's ever stood for and ever meant to people so we would like to extend that opportunity to others," said Pete Carroll.

Meredith, who turned 92 in August, joined Pacific in 1966 when he was recruited from his position at Albion College by then Pacific President Robert Burns to help establish Callison College. Callison was one of the first cluster colleges in the nation and emphasized international relations with faculty and students traveling annually to the far east.

A distinguishing feature of Callison was its focus on non-western studies, requiring students to spend their sophomore year abroad. Meredith travelled to India with students on several occasions and, together with Pat and their young sons, joined students in Japan where he was a professor in residence. “You had to do it. You had to leave. Teaching could not be isolated in one place,” said Meredith. During their stay in Japan he made it a point to visit each student’s home or place of residence all over the island while Pat made sure their boys kept up with their schoolwork. Together, they homeschooled their children in the mornings and took them to visit shrines and temples in the afternoon. “Everybody had to be exposed to another way of seeing the world. It was so enlightening. I was privileged to be part of it.”

In later years, he earned Fulbright teaching fellowships and taught in Graz, Austria in 1984 and Yogyakarta, Indonesia in 1992.

While at Pacific, Meredith served as dean of the chapel and a professor of the humanities and religious studies. He transformed the chapel into the epicenter of campus by integrating it into the curriculum. Known for his free thinking and avant-garde teaching style, he introduced classes like Religion and Modern Culture, Life of Jesus, Religion and Sport and Religion and Cinema. Classes were punctuated by guest lectures from influential figures, including Angela Davis, Timothy Leary, Dolores Huerta and Charles Schulz, who often stayed to have lunch with students.

“We love him so much and we love all that he's ever stood for and ever meant to people so we would like to extend that opportunity to others" — Pete Carroll.

One class was usually all it took to solidify his place in the hearts of his students.

Justin Gingery ’96, ’99, who spearheaded the alumni fundraising campaign, can recall his first day in Meredith’s class. Meredith asked if anyone ever wondered if Jesus could have been married. The class was stunned. Gingery was sold. From that day on, he made it a point to pick his schedule based on whatever Meredith was teaching that semester.

Gingery grew up in a single-parent household and credits Meredith with helping him through a difficult time in his life. “He became like a father figure to me. There’s not one aspect of my life that I don’t model after him,” said Gingery who works as an attorney in Roseville. “I can’t say enough about the man. He was a shepherd who brought me to the meadow of peace.”

To the Merediths, students were – and are – family. “His interaction with students beyond the classroom was an important part in our lives and the students’ lives,” said Pat Meredith. Before each Thanksgiving break, the couple hosted students at their home. “We would serve a big pumpkin dessert and they would laugh and talk and tell stories. They came to the house many, many times.”

Reunions beyond the classroom continued well after students had graduated. On a few occasions, Meredith even travelled on the road with Coach Carroll and his team. These visits usually included playing catch on the football field or a game of basketball.

“Larry has great hands,” said Carroll. “He could catch the ball in the back corner of the end zone and he has a classic sweeping hook shot on the basketball court.”

But it’s his legacy as a teacher, mentor and friend that will stand the test of time.

“I learned a lot from teaching students,” said Meredith. “Being a student is a precious, fleeting moment. I was a guest in their lives, and really the whole tenor of that meeting is up to both of us, but the student really was the center of it all. It’s the student that invites you in and once that happens, it can be a wonderful time for both of us. It’s the greatest job in the world.”

To contribute to the fund, donors can give online or contact Janice Bross at jbross@pacific.edu or 925.323.6094.

Alumni College of the Pacific Development